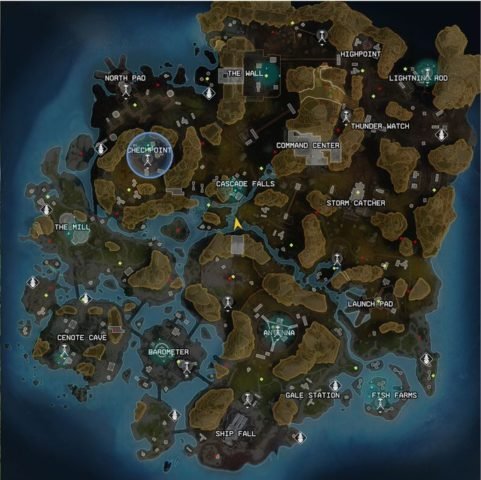 Apex Legends is an action-packed battle royale game, released by Respawn Entertainment. The game offers a competitive multiplayer environment with up to forty players battling it out until only one remains alive. Apex Legends has received praise for its fast paced gameplay and unique characters like the Titanfall series of games before them, but what makes this title stand out?

Apex Legends Season 11: Escape will feature a new map to the rotation, as well as Titanfall’s Ash to the roster. Storm Point is said to be the name of the fourth map, which is larger than any other previously seen. However, there are 17 key locales for players to get acquainted with, each of which differs greatly from the others.

All of Ash’s Apex Legends skills may be found here.

Barometer might be one of Storm Point’s hottest spots for a drop. This is mostly due to what Electronic Arts refers to as a “honeypot of riches.” This place is on the map’s southwestern edge, and it’s one of just a handful that’s surrounded by water.

Despite the fact that the map shows Command Center nestled between two mountains, this place of interest is really located within the rock formation. It may be accessed by descending to the mountain’s summit and descending through a network of zip lines from deep beneath.

The Antenna, at the map’s center, is one of Storm Point’s most expansive sites. It has a high arching communications dish that legends may climb on, as well as a cluster of buildings underneath it.

Checkpoint, which is located on the northern edge of Storm Point and is surrounded by gigantic rock walls on all sides, is guaranteed to offer a safe haven for gamers. There are two floors inside it, each having a long structure capable of storing possible riches.

Lightning Rod, like Crash Site on the Kings Canyon map, is at the Storm Point’s northernmost section, separating itself from the rest of the map. It is, however, the simplest to recognize, since its skyscraper-tall rod is one of the island’s highest points.

Storm Catcher is a fictional character.

Aside from the massive outer ring, Respawn has disclosed that the site includes a smaller area underneath it that allows for close-quarters gunfights. Storm Catcher is located on Storm Point’s eastern part, not far from the coast’s center.

North Pad’s narrow, lengthy trenches will allow you travel freely if you’re looking for the safest landing spot. Even better, this site is located on the extreme western edge of the map, with an overhanging tower to mow down opponents from afar.

The Mill, which can be found at the bottom of the map, has two large closed structures that are supposed to house “high-value” commodities.

Shipfall, like Airbase before it, enables players to seek safety within a massive abandoned spacecraft. Players will also find groupings of structures with bonus treasure at both ends of the ship.

Cenote Cave, like Barometer, may get overrun by hostile teams. This is owing to it being one of Storm Point’s biggest points, as well as containing some of the rarest treasure.

The Wall, which is located above the center of the map, has a massive building wedged between some of Storm Point’s largest rock formations. Players will be able to leave this area and go to either the North Pad or the Command Center.

Legend has it that the Storm Point’s lone remaining ballon may be found at High Point, far to the northeast. Respawn has implied that there are underground tunnels linking this place to other spots on the map, despite its remote position.

Thunder Watch is one of Storm Point’s smallest towns, although it looks to have enough landmarks to obtain high-quality weapons and shields. In addition, one of Storm Point’s few Gravity Cannons is located in the heart of the city, allowing quick access to adjacent mountain summits.

Cascade Falls are a series of waterfalls that cascade down

Cascade Falls is located in the middle of Storm Point, sandwiched between the several islands and bigger land masses. Although the popularity of this POI is unclear, its creator expects it to be a battlefield.

Along the southern shore, the Launch Site has plenty of open room for players to hide. A control facility on the actual location, in instance, is said to have enough containers to splendidly equip many teams.

You’re not alone if you’ve looked at the position of this map and wondered how you’ll make it through. With Apex isolated by water in the southeastern area, Fish Farms is by far the riskiest spot to drop. Thankfully, a Trident may be used to navigate over the dangerous body of water.

Finally, Gale Station is recognized for being a tiny spot where legends may rest peacefully after visiting the Fish Farms. Although it is reported to have a limited amount of crates to open, the creator has cautioned that the quality of its equipment should not be overlooked.